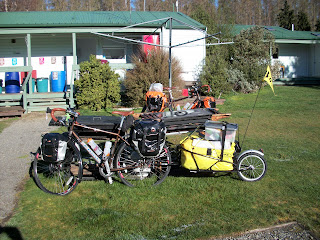 
We bought these bikes new in Salida Colorado this year.  They were discounted as they weren’t the current model but that was great for us.  We would have preferred two 54cm bikes however they only had one 54cm and one 56cm bike in stock so that’s what we bought.  In all honesty there is very little difference between the two, you only notice the slightly longer reach on the 56cm bike.  The frame has a sloping top tube like a mountain bike which helps with stand over and is probably why the 56cm bike still fits me well.  Both the frame and fork are steel so a repair in the middle of nowhere would be more likely than with alloy and should be a little more compliant. They are strongly built but the sacrifice is the weight which is not outrageous but is also no race bike.  The finish is very pretty in an understated fashion but it is not as hard wearing as most and they both carry several scratches now.


The bikes are as standard with the exception of a smaller bottom front chain ring.  We fitted 26t instead of the standard 30t to give easier climbing whilst loaded.  To be honest a smaller ring would have been better but a 24t is the lowest you can fit to the crank set which is my only gripe with the bike.  A mountain bike crank set would give a better range for heavy touring and would make finding replacement rings far easier.  The 50 39 30 set up does work well though with a light load, flat terrain or commuting.


The rest of the group set includes bar end shifters which I have never used before but soon got used to, I guess fitted for their strength and minimal parts.  The mechs are road front, mountain bike rear and a 11-32 cassette to finish it off.  Shifting is excellent and we have only had the chain drop off the inner ring a few times which you could blame on the 26t ring.


The disc brakes are a very nice addition, even fully loaded down the steepest of mountain roads I have been able to come to a complete stop.  I guess my bike is a very early production model as it has Shimano calipers as shown in the sales blurb however the tech spec lists Avid BB7 calipers which are fitted to the other bike.  I have found very little in performance between the two setups but the tool free adjustment of the BB7s just give it the edge. The handlebars give lots of positions whilst riding which helps with fatigue but adding an auxiliary set of cyclocross brake levers would be a nice addition. After 4500km the pads are still ok but will need to change the rears soon.  The power of the BB7s seems to be much better than the shimanos now but the shimanos have had a harder time as they have had to stop the trailer.  New pads may sort this.  I found removing, checking and refitting the pads much easier on the shimanos even though you need an allen key to adjust them as thye BB7s adjusters can be stiff and difficult to get a good grip on.


The standard racks have worked well and only need the occasional tweak on the allen bolts.  I am sure there are stronger, lighter more versatile racks out there but as a standard fitment they have done exactly what is required of them.


The Continental Contact tyres  fitted have also be great, both back tyres are balding now but nearly 3000 miles with 2000 of them heavily loaded can’t be bad especially considering we haven’t had 1 puncture!  The first puncture in the fronttyre at 5500km, not bad.  Shame it was the day before I wrote the wheel off!!


In conclusion these bikes are capable tourers out of the box.  They have been comfortable, strong and reliable.  Changing the gearing or not to suit your needs and maybe some well placed protective tape is all I would advise before you set off.  If your journey takes you off road a mountain bike would be a better choice but larger tyres can be fitted due to good clearance and the disc brakes.